Explained: What is India’s first seaplane project and how will it function? 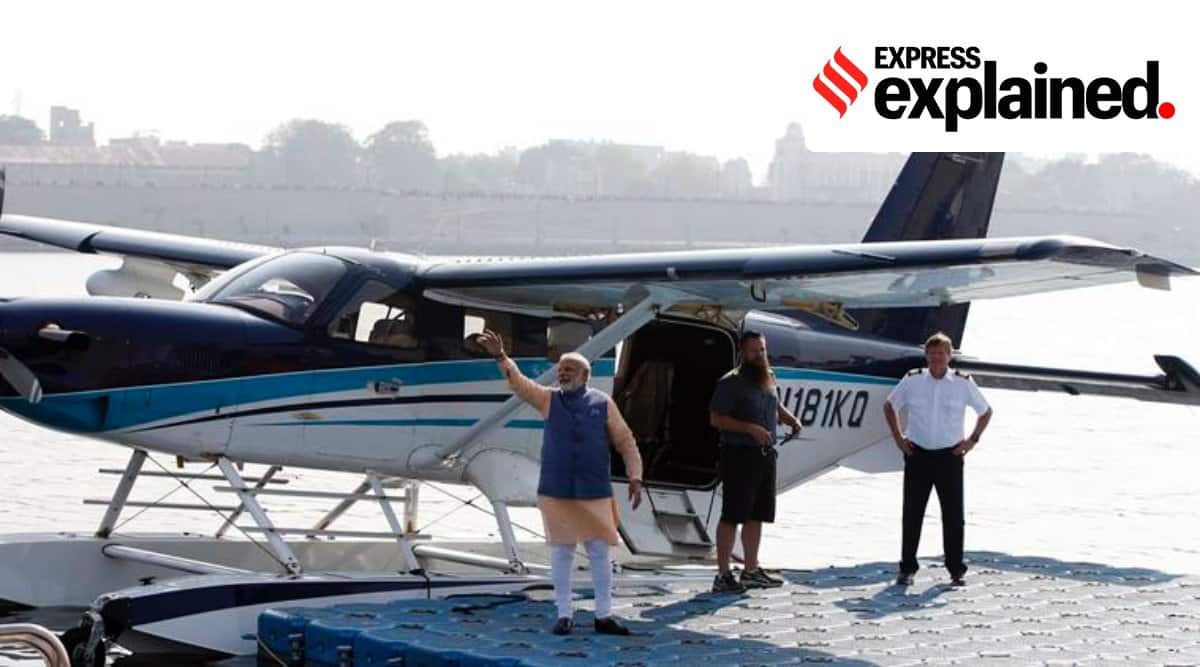 PM Narendra Modi had taken a seaplane flight from Sabarmati Riverfront in Ahmedabad to Dharoi in December 2017, ahead of the Gujarat assembly polls that year. (File/Express photo: Javed Raja)

The first of the five seaplane services in Gujarat, connecting Sabarmati River in Ahmedabad to the Statue of Unity in Kevadia in Narmada district, will be inaugurated on October 31, the birth anniversary of Sardar Vallabhbhai Patel. Officials say Prime Minister Narendra Modi is likely to fly in the first 14-seater amphibian flight that will eventually be open to the public. The other spots are, Dharoi dam in Mehsana district, to connect Ambaji and Shatrunjay dam in Palitana of Bhavnagar district as well as Tapi in the next phase.

Construction of the terminals at both ends is almost complete with prefabricated structures and a complete glass facade. From the proposed terminal building, the passengers will use a 3-metre long aluminum gangway, hop on to the floating walkway and reach the docking pad of the sea plane.

What is India’s first seaplane project?

The first seaplane project of the country is part of a directive of the Union Ministry of Civil Aviation. As per the directive, the Airports Authority of India (AAI) requested state governments of Gujarat, Assam, Andhra Pradesh and Telangana and the administration of Andaman & Nicobar to propose potential locations for setting up water aerodromes to boost the tourism sector.

A seaplane is a fixed-winged aeroplane designed for taking off and landing on water. It offers the public the speed of an aeroplane with the utility of a boat. There are two main types of seaplane: flying boats (often called hull seaplanes) and floatplanes. The bottom of a flying boat’s fuselage is its main landing gear. This is usually supplemented with smaller floats near the wingtips, called wing or tip floats. The hull of a flying boat holds the crew, passengers, and cargo; it has many eatures in common with the hull of a ship or a boat.

📣 Express Explained is now on Telegram. Click here to join our channel (@ieexplained) and stay updated with the latest

Where will the seaplane connect?

In Kevadia, the proposed Terminal will be spread over 0.51 acres in the premises of the Sardar Sarovar Narmada Nigam Ltd., located in the Panchmuli lake (Dyke 3) of the Sardar Sarovar Dam at Limdi village. It is approximately 90 kms from Vadodara, 150 kms from Surat and 200 kms from Ahmedabad — with an aerial distance of 74.6km from Vadodara airport. The Terminal building will have a plinth area of 340 m and will be equipped with provision of all modern amenities, including two check-in counters, one ticketing, facilitation and concessionaires counters on the land side. A daily inflow of 200 passengers is estimated as per the proposal.

How will the service function?

Officials say that SpiceJet will operate a 19-seater plane, which will be able to accommodate 14 passengers. SpiceJet said the company has entered into a contract with a French company, which overtook the original Japanese manufacturer of 10-14 seater seaplanes. Officials of SpiceJet, who did not want to be named, said that Spicejet has been conducting trials with different models of seaplanes in Mumbai since over a year and two seaplanes have already arrived in Mumbai from where they will be brought to Sabarmati River in Ahmedabad before the October 31 launch.

“There will be four flights a day between Ahmedabad and Kevadia on each side — which means four arrivals and four departures. The ticket price per person will be about Rs.4,800. Anyone wishing to cut down on their travel time between Ahmedabad and Kevadia which currently takes about four hours one way, can do so by turning it into a day’s trip. Return tickets can be booked on the seaplane to ensure that the passengers can return to Ahmedabad from Kevadia during the day. The journey by seaplane will be about one hour,” the official said. Fuelling and maintenance of the seaplanes will be carried out at the Ahmedabad airport.

What impact will it have on the environment?

The water aerodrome is not a listed project/activity in the Schedule to the Environmental Impact Assessment Notification, 2006 and its amendments. However, the Expert Appraisal Committee was of the opinion that the activities proposed under the water aerodrome project may have a similar type of impact as that of an airport.

In Narmada, the Shoolpaneshwar Wildlife Sanctuary is located at an approximate aerial distance of 2.1 km from the proposed project site in south-west direction while the nearest reserve forest is situated at a distance of 4.7 meters in east direction, which serves local sensitive species of fauna.

The bathymetric and hydrographic survey was conducted by Inland Waterways Authority of India (IWAI) before finalising Dyke 3, which is a rock-filled pond and popularly called the ‘Magar Talav’ as it is infested with crocodiles. Work on evacuating crocodiles from the lake has been on since January 2019, after which mesh fencing of the boundary was also completed to prevent crocodiles from re-entering from the connecting Dyke 1 and 2.

The site was finalised for the terminal as its dimensions suit the requirements of landing the seaplane, which requires a minimum width of 900 metres in a water body with a depth of at least six feet. Senior engineers of SSNNL added that while a seaplane does not require any construction of a runway, rubber buoys have been lined up to indicate the landing path for the seaplane.

In its proposal seeking environmental clearance, the Director of Aviation, Government of Gujarat, has allayed fears of environmental impact during the stage of construction. In terms of the long-term effects of the seaplane service, the government has said, “During seaplane operations, there will be turbulence created in the water while takeoff and landing of seaplanes. This will lead to more operation process i.e. mixing of oxygen in the water. This will have a positive impact on the aquatic ecosystem near seaplane operations increasing oxygen content and decreasing carbon content in this system.”

Where else do seaplanes operate?

In India, Jal Hans, a commercial seaplane service based in the Andaman and Nicobar Islands was launched as a pilot project on 30 December 2010 by the then Indian Civil Aviation Minister, Praful Patel with a capacity of 10 passengers.

📣 The Newsjatt is now on Telegram. Click here to join our channel (@Newsjatt) and stay updated with the latest headlines

For all the latest Explained News, download Newsjatt App.

Building the Future: A Community Based Approach to Re-Evaluating Technology

Bloody Days Ahead As India, Pakistan Join Two Opposite Military-Blocks Of The…

2+2 to review accomplishments, lay down next steps for India-US global cooperation:…