The economic reforms that began slowly in 1980s and got turbo-charged in 1991 did bring high growth, but this growth is perhaps unlike what was anticipated. The Lewisian structural transformation – resources shifting from low productive agriculture to high productive manufacturing (industrialisation) that brought prosperity to developed economies in the West (the US and parts of Europe) and the East (Japan, Korea, Taipei, and China) – did not occur.

Instead, India witnessed a growth led by the services sector, like some of the African countries (Tanzania and Ethiopia), the long-term implications of which are not known yet. Surplus labour in agriculture did shift (census results show a fall of 9 million cultivators between 2001 and 2011) from rural to urban areas but the massive reverse migration (from urban to rural areas) witnessed during the lockdown has changed the dynamics of labour market about which nothing can be said with any certainty because the Indian government didn’t bother to track the development nor collected relevant data. 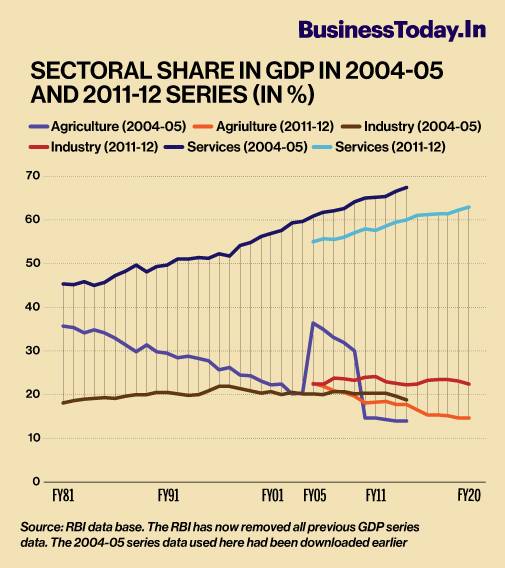 Key noticeable features of this growth are:

Despite a sharp fall in its share of national income (GDP), agriculture remains a disproportionately large employer, reflecting that a large part of the population is surviving on meagre incomes.

The government no longer provides employment share of different sectors. Thefollowing graph uses data from the erstwhile Planning Commission of India and the ILO estimate for 2019 – closest match to the fiscal year 2019-20 – to show the sectoral share of employment. 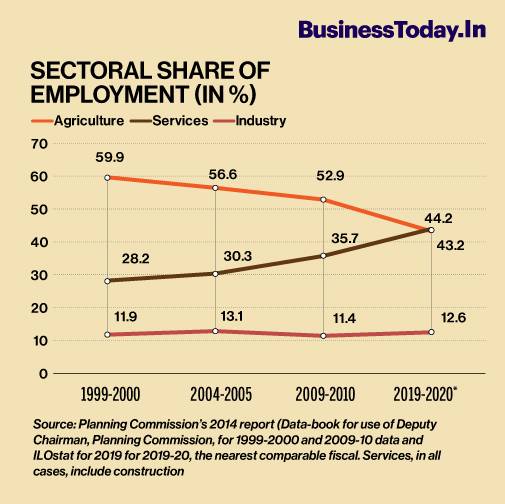 The graph shows agriculture provided employment to 43.2% of India’s total workforce; industry’s share is stagnant (from 11.9% to 13.16%) while the services’ share-44.2%-risen to surpass that of agriculture in FY20.

This combination of low income and high employment in agriculture is what makesIndia’s growth unsustainable.

Gap in farm and non-farm incomes

The government has not made any attempt to map farm and non-farm incomes in the past six years despite promising to double farmers’ income.

The only estimate that exists post-2014 is that of Prof. Ramesh Chand and his colleagues in their 2015 paper “Estimates and Analysis of Farm Income in India, 1983-84 to 2011-12” published in the Economic and Political Weekly. The Niti Aayog used this estimate in its March 2017 policy paper “Doubling Farmers’ Income”. Prof. Chand wrote another paper in 2017, “Doubling Farmers’ Income: Strategy and Prospects”, in which he said: “It is ironic that estimates of farmers’ income are not published by the CSO, though time series and year-wise estimates of sectoral income for agriculture are available in National Accounts Statistics.”

He became a member of the Niti Aayog, apex government think tank that replaced the Planning Commission, in 2015 and holds the rank of Minister of State in the Government of India. Six years down the line, there is no sign of such estimates from the CSO(Central Statistical Office), the Niti Aayog or from Prof. Chand himself. He did not respond to a mail (that his office insisted on) requesting to share his latest estimates.

Also Read: Rebooting Economy 52: The unfinished agenda of land reforms nobody talks about

Prof. Chand had further said in his 2017 paper that “low level of absolute income as well as large and deteriorating disparity between income of a farmer and non-agricultural workerconstitutes an important reason for the emergence of agrarian distressin the country since 1990s” and also for “asharp increase in the number of farmers’ suicidesduring 1995 to 2004”.

Why India’s growth model is skewed against agriculture?

It is not difficult to understand why India’s structural transformation in the reform (post-liberalised) era took an unusual trajectory.

In 2013, the Asian Development Bank (ADB) published a report “Agriculture and Structural Transformation in Developing Asia: Review and Outlook” analysing the growth stories of Asian countries.

Even here, India is an outlier.

The report said “the most successful Asian economies” pursued “agricultural development-led industrialisation pathway” and gave examples: “The newly industrialised economies in East Asia (Japan; the Republic of Korea; and Taipei, China), followed an agriculture development-led industrialisation pathway. The fast-growing transition economies (the People’s Republic of China and Vietnam) seem to be traversing a similar one. Agricultural growth has also been a prominent feature in the rest of developing Asia, particularly Indonesia, Malaysia, and Thailand.”

It kept India outside the group of “successful transition economies” with this observation: “However, growth in agriculture has lagged in Bangladesh, India, Pakistan, and the Philippines; in these countries, theperiod of rapid sustainable growth came late or has yet to materialise.” It singled out India where “the absolute number of people employed in agriculture is still rising” even among countries with more than 50% employed in agriculture.

The study underlined that “growth in agriculture supports the subsequent growth of industry”, not the other way round that India pursued. In the reform era, India ignored agriculture and promoted industry (manufacturing included) which has neither provided jobs nor added much to the GDP.

Former Prime Minister Manmohan Singh, the architect of 1991 liberalisation, tried a course correction following a long spell of agrarian distress and farmers’ suicide by setting up the National Commission on Farmers (NCF) in 2004, under MS Swaminathan who had played a key role in the Green Revolution. (Singh made several course corrections, to know more read, ” Rebooting Economy 50: Economic reforms for whom and for what? “)

The commission produced five volumes of analysis and recommendations. Prof. Chand wrote (2017) that the expected shift in focus of policy and development strategy from increasing agricultural production to increasing farmers’ welfare and income, or both, did not happen.

What did China do when it began reforms?

India has long competed with China for growth and failed and yet never learnt from its experience in agriculture.

Two agricultural economists, Prof. Shenggen Fan of the US’s International Food Policy Research and his counterpart in India, Prof. Ashok Gulati, wrote a paper in EPW in 2018-“The Dragon and the Elephant: Learning from Agricultural and Rural Reforms in China and India”, in 2008.

Three of the key points they highlighted were:

Also Read: Rebooting Economy 49: Who needs corporates to run banks and how will it help Indian economy?

There are other lessons from China’s growth story too.

China ensures its farmers get good price for their produce and got into trouble for this in 2019 when the WTO ruled against its high agricultural subsidy. Yes, China heavily subsidies its agriculture, far more than India.

Here is an eye-opener from a Washington Post report on the WTO development, which was written by Prof. Kristen Hopewell of the University of Edinburgh (March 4, 2019).

She wrote China was now the world’s largest subsidiser of agriculture, providing $212 billion in farm subsidies in 2016, which was significantly more than the European Union ($100 billion) and the US ($33 billion). Its subsidies included “government purchases at above-market prices, as well as market price support programme, where farmers receive a direct payment from the government if market prices fall below a minimum set price”.

The complaint against China was lodged by the US in 2016.

Interestingly, in 2013, the US Department of Agriculture report “Growth and Evolution in China’s Agricultural Support Policies” wrote how the US benefitted from high farm subsidies of China.

It said: “In recent years, Chinese price supports and subsidies have risen at an accelerating pace after they werelinked to rising production costs. Per-acre subsidy payments to grain producers now equal 7 to 15 percent of those producers’ gross income… Chinese authorities began raising price supports annually to bolster incentives, andChinese prices for major farm commodities are rising above world prices, helping to attract a surge of agricultural imports.US agricultural exports to China tripled in valueduring the period when China’s agricultural support was accelerating.”

In India, farmers are fighting for legal rights for MSP (price support) in trading with private companies and traders outside the regulated APMC mandis but the central government and a large number of agricultural economists are strongly opposing it, leading to a prolonged (more than 40 days) protest in the cold winter of Delhi, which has claimed at least 50 lives (some by suicide) so far.

Experts in India blame the MSP for rise in prices of agricultural produce over world price for harming trade, while the government’s trade policies for farm produce are so whimsical that onion export was banned a day before the new farm law Essential Commodities (Amendment) Ordinance of 2020 was passed by the Parliament in September 2020, in gross violation of the conditions laid out in it for such intervention. (For more read “Rebooting Economy 51: Where is India’s vision, plan for sustained agriculture growth and farmers’ welfare?”)

There is yet another key lesson from China.

India invests very little in agriculture research and education (R&E), which Prof. Gulati claimed to have the “highest impact” on agri-GDP growth and poverty alleviation. He wrote, in 2019, that China spent $7.8 billion on agriculture knowledge, innovation, including agri-R&D, in 2018-19 – which was 5.6 times more than India’s $1.4 billion.

Further, India’s investment in agriculture has seen a fall. Agriculture’s share of gross capital formation (GCF) fell from 8.5% of the total GCF of economy in FY12 to 6.5% in FY19, mainly due to a fall in private investment – according to the Agricultural Statistics at a Glance, 2019.

What does all this tell about India’s growth model and its neglect of agriculture?

Also Read: Rebooting Economy 45: What is AatmaNirbhar Bharat and where will it take India?