Singapore emerges as food tech hub, thanks to state support


SINGAPORE — The city-state of Singapore is evolving into the food tech capital of Asia, thanks to government support at every step.

Startups from around the world have set up shop here to take advantage of the public largesse. One is &ever, a German vertical farming venture.

“Singapore is an attractive market” for the company, given its population density and the government’s prioritizing of food security, CEO Henner Schwarz says. “As of today, Singapore is globally seen as the most advanced indoor vertical farming ecosystem and &ever is proud to be part of this scene.”

&ever has launched vertical farms back home as well as in the Middle East. They run up the walls of factory and other buildings, bathed in artificial light.

This year, &ever will open a plant and R&D center in Singapore, with plans to produce an annual 500 tons of vegetables and herbs. The Economic Development Board has assisted in multiple ways such as finding a location for the factory, and the Singapore Food Agency is providing financial subsidies.

U.S. startup Eat Just announced in October that it and a consortium would together spend up to $120 million to build and operate a mung bean protein plant here for egg substitutes. Product will be shipped to such Asian markets as China, Thailand and South Korea.

That December, Eat Just said it had received from Singapore the world’s first-ever government approval to sell lab-grown chicken meat. The company has started supplying it to a local restaurant. “Singapore has strong IP rights protection and a highly skilled talent pool,” said Tetrick, referring to intellectual property, “and it is positioned as a critical node in the network of greater Asia, which consumes more animal protein than anywhere else in the world.”

The government support does not end at production and sales. There are plans for &ever’s R&D center to conduct joint research with public and private partners to optimize crop yields using artificial light.

One partner, the Agency for Science, Technology and Research, has agreed to establish a Food Tech Innovation Center with state-owned investment group Temasek Holdings.

The center will be outfitted with laboratories and test kitchens for startups that lack such facilities. It seeks to accelerate the commercialization of promising food tech in Singapore, according to Temasek.

The government support offered for food tech has begun to nurture a local industry. Shiok Meats, a startup launched by two female researchers, held a tasting event in November for what it bills as the world’s first cell-based lobster meat and its previously developed lab-grown shrimp meat.

The further-established food tech sectors in the U.S. and Europe enjoy a deep bench of university researchers as well as generous streams of venture capital. To play catch-up, Singapore has positioned food tech as a key industry deserving of support from state entities from the R&D stage all the way to market entry and sales.

Singapore’s national safety evaluation guidelines for new foods have a section that specifically covers cultured meat. Eat Just’s guilt-free chicken meat is the first to make the grade. The rigorous screening looked at the production process and checked for risks. 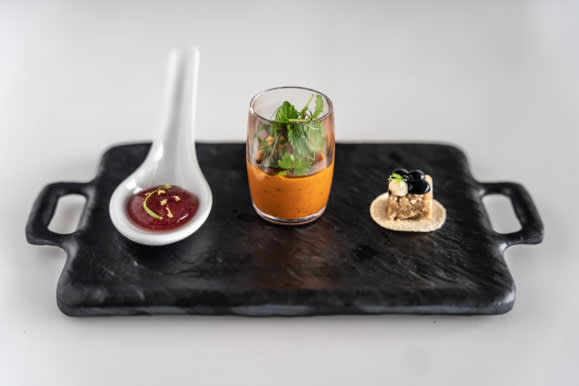 For Singapore, it is a significant breakthrough to put together a framework and a group of experts to oversee the approval process for the artificial meat.

Singapore looks to overcome its lack of arable land and roughly triple its food self-sufficiency to 30% by 2030. Urban farming and artificial meat are seen as promising means.

The city-state aims to become Asia’s food tech hub by investing financial and human resources in the sector. The world will need 40% more food by 2050 to feed the bigger population, according to Temasek.

But farming and livestock production consume large amounts of water and are a major culprit in greenhouse gas emissions. Food tech has the potential to lighten the environmental impact and capture future demand.

For now, the main challenge for food tech is bringing down prices. A single kilogram of lab-grown shrimp meat costs around $5,000 to produce, according to Shiok Meats.

The startup looks to slash the cost to 1% of this by 2022 so that it can bring the product to market.

When Tech and Fitness Collide

Parler is back online, sort of, thanks to…